You Are Here: Home → How would New York City look like should sea levels rise by 8 feet 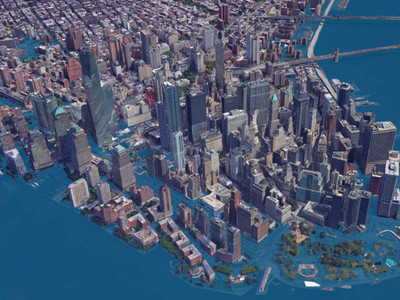 A new interactive map from the non-profit organization Climate Central provides a disturbing visualization of what New York City would look like if sea levels were to rise dramatically.

Below you can see a few examples how some of the city’s different neighborhoods, attractions and sights would develop:

Needless to say, much of the lower Manhattan would have been submerged in water. Battery Park, the 9/11 Tribute Museum and most of the South Street Seaport would be in poor condition.

The Liberty Statue herself would do quite well, but a large part of the rest of Liberty Island would not.

Roosevelt Island as a whole would be in bad shape if the sea level were to rise by two metres, and the southern tip would get the worst of it.

It is safe to say that these two quarters are doomed.

Read more from the Source